Overview of the Portfolio

In 2007 Almadex’s predecessor, Almaden Minerals, initiated a regional exploration program in Nevada. This work resulted in the acquisition by staking of several new projects where high sulphidation epithermal gold-silver mineralization and alteration occur including the Willow Project located in Douglas and Lyon Counties.

Listed below are brief descriptions of several projects within Almadex’s Nevada portfolio.

The Monte Cristo Project is 100% owned by Almadex and was acquired by staking. The ~170 hectare claim covers an area of hydrothermal alteration and quartz veining interpreted to represent a low sulphidation gold-silver system. Past work includes limited surface mapping and sampling. Future plans include diamond drilling to test these targets.

Davis/Paradise comprises 302 claims totalling approximately 2,400 hectares with multiple targets, located approximately eight miles southeast of Gabbs, Nevada and five miles northeast of the Paradise Peak gold mine, which was active from 1984 to 1994. Almadex Minerals holds the right to acquire 100% of the project, subject to an underlying royalty as disclosed in its press release of August 11, 2021. 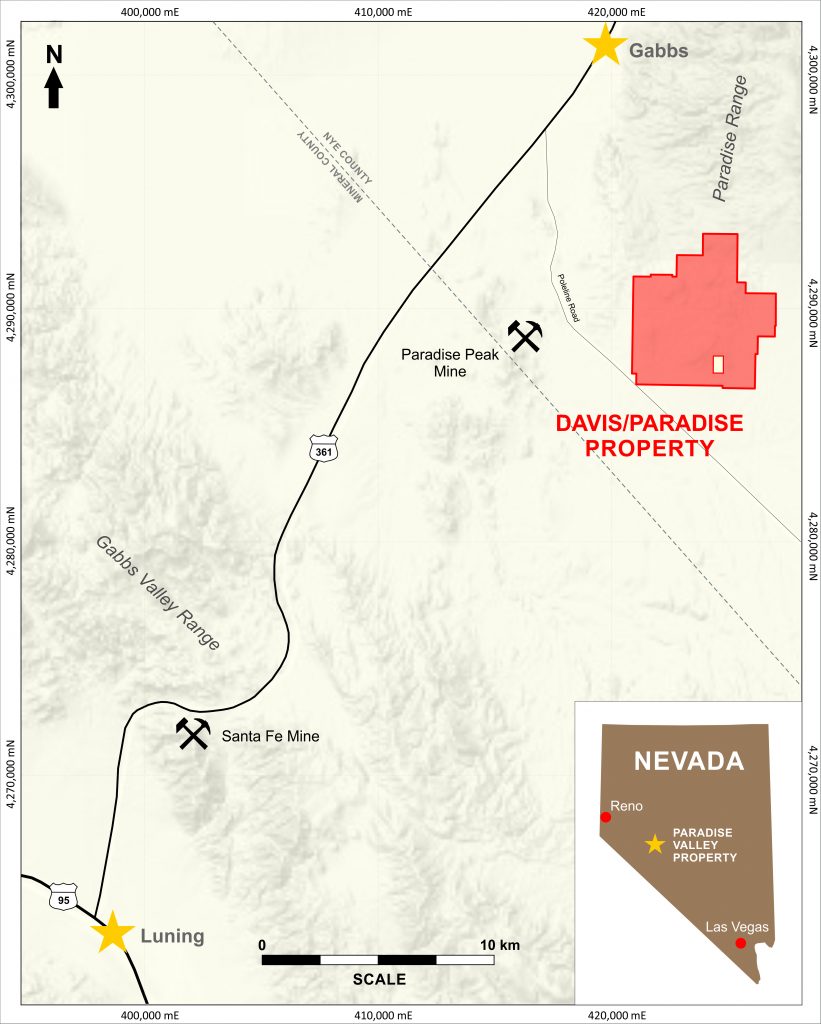 Almadex consolidated the Davis/Paradise Valley area in 2019 by optioning from the underlying owners the Davis property, which adjoins the Paradise Valley property which had been staked by Almadex’s predecessor company. Almadex then optioned the combined properties to another company in 2020, prior to terminating that option agreement in accordance with its terms in August, 2021.

The project is located in the Walker Lane, a structural zone of mainly northwest-trending, strike-slip faults along the western edge of the Great Basin that hosts significant, historic and currently producing, epithermal precious metal deposits including the Comstock Lode at Virginia City, the Round Mountain gold deposit, Paradise Peak, Tonopah and Goldfield.

The Northern Davis portion of the property covers an area of high-level epithermal alteration and veining, including a zone of brecciation and silicification interpreted to be a surficial breccia and sinter, extending over 1.5 km in length running parallel to the Davis zone. The exposed vein hosted gold-silver zones have seen historic mining and various exploration drill programs. 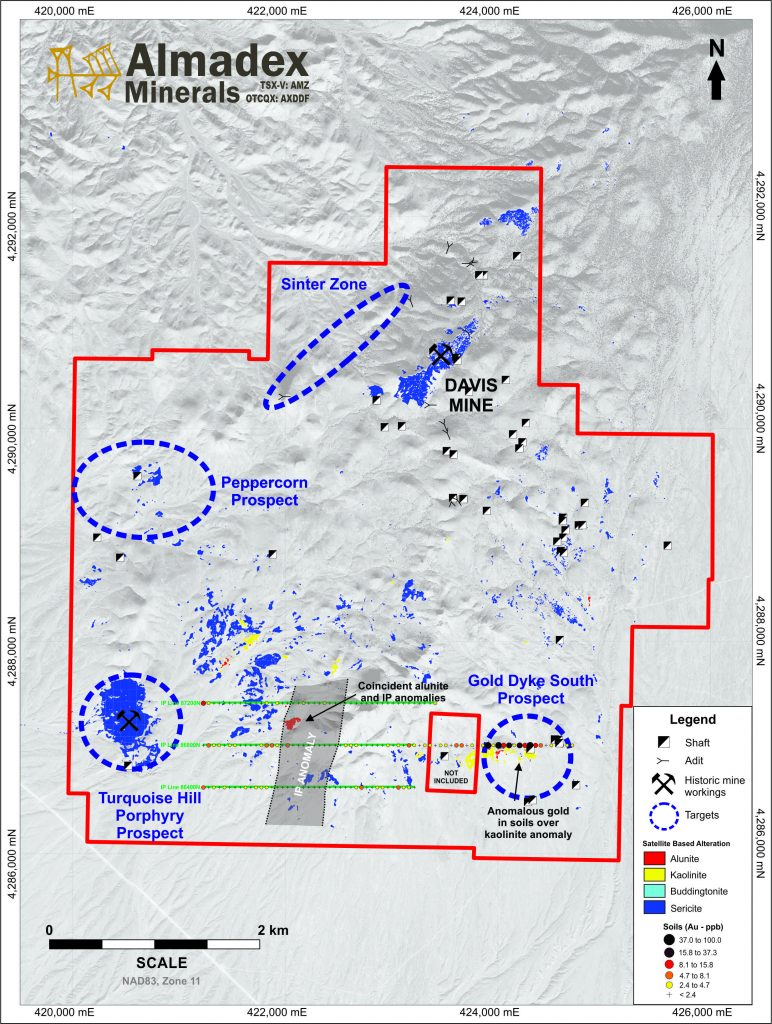 The property was held by USSRAM Exploration from 1979 to around 2004, during which time various exploration and drilling programs were carried out on the property, including eleven drill holes to investigate mineralisation in the historic Davis mine area. While this drilling is historic in nature and was not completed in accordance with NI 43-101 and therefore cannot be relied upon, it provides a clear exploration focus.

One of the significant intercepts from this historic drilling program is reported to have returned 40 feet (12.2 metres) of 0.18 oz/t gold (6.2 g/t gold) and 0.62 oz/t silver (21 g/t silver). The strike and dip of the Davis vein was interpreted by the historic operators but cannot be verified by the Company at this time so true widths cannot be estimated or confirmed by the Company.

The Southern Paradise portion of the property covers high level acid sulphate quartz alunite alteration as well as a zone of phyllic alteration identified by past alteration mapping and a recent WorldView remote sensing study conducted by the Company in 2020 with results received in 2021. This new data suggests that the Paradise area represents a large lithocap with potential for both gold-silver high sulphidation mineralisation and porphyry mineralisation at depth, similar to that seen at the adjacent Paradise Peak gold deposit where both styles of mineralisation were observed. There is evidence of historic drilling on the Paradise property with unknown results.

In early 2022 a claim internal to the Almaden claim package was optioned under terms to acquire a 100% interest through a series of payments. Field work conducted in April, 2022 on the claim mapped an area of strong phyllic alteration associated with several styles of quartz veining with pyrite and chalcopyrite evident, suggesting a porphyry style of mineralisation. Samples were collected for assay and fluid inclusion petrography to confirm this interpretation. The Company plans to conduct first pass drilling on both the high sulphidation and porphyry target areas in the upcoming drill program.

Almadex initiated a drill campaign at Davis Paradise Valley in May, 2022 with part of the program at the Davis mine area aimed at confirming historic results in order to define a second phase of drilling. The program also aims to conduct first pass drilling on a sinter zone to test for underlying vein mineralisation.

Recent field work on the sinter zone has identified banded opaline quartz veining up to 3 metres wide which were sampled for analysis. Additional drilling is planned for high sulphidation and porphyry target areas at the Paradise portion of the property.

The Veta project is 100% owned by Almadex and was acquired by staking. The project covers 33 hectares of an area of intense hydrothermal alteration interpreted to represent a high sulphidation gold system similar to the nearby Sante Fe gold deposit mined historically. Past work includes surface mapping and sampling. Future plans include diamond drilling to test these targets.

Abacus can earn an initial 60% interest in the Willow project by incurring work expenditures on the project totaling US$3,000,000 and issuing a total of 416,668 shares to the Company over a five-year period.

Upon having earned its initial interest, Abacus will be required to incur minimum annual exploration expenditures of US$500,000 on the property and, by February 22, 2027, deliver a Feasibility Study in respect of the Willow project to Almadex, subject to certain rights of extension. Should Abacus fail to incur the minimum annual expenditures for two consecutive years, Almadex may elect to become operator of the project, and the parties will enter into a 60%/40% joint venture agreement with standard dilution provisions.

Abacus will earn an additional 15% interest in the project upon delivery of a Feasibility Study to Almadex, at which point a 75%/25% joint venture will be formed, with pro-rata funding of ongoing work in proportion to the respective interests held at that time. Until such time as a joint venture is formed pursuant to the agreement, Almadex’s interest is a carried interest.